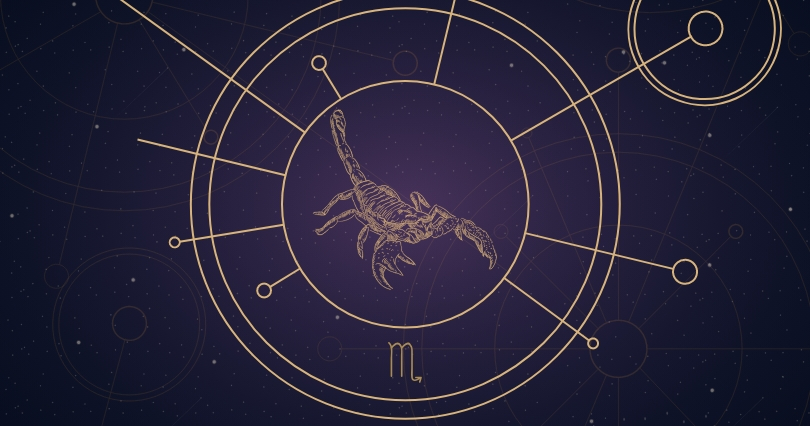 Scorpio belongs to water signs in astrology and is ruled by two planets: Pluto and Mars. Since Pluto was recently discovered, the Scorpio was associated with Mars energy at first. Scorpio season is occurring from October 23rd to November 23rd, and its symbol is ♏.

In astronomy, Scorpio is a constellation and belongs to the Zodiac family of constellation along with 11 others. All of them are linked to astrology and known as 12 Zodiac signs.

Transformation, mysticism, secrets and esoteric knowledge – this is all linked to Scorpio people. It is said for them that they can be drawn everything negative and positive, simply from their mind. They are intuitive, excellent advice-givers and therapists. Scorpio is interested in deep knowledge and is known as a good analyst, detective, and investigator. They are drawn to people who seek help, and adore giving them advice and helping them as much as possible. Loyal and amazing lovers and friends.

These are there for life, but if you hurt them, they will make the living hell of your life. Scorpio is not very fond od authority, and they don’t want being bossed around. They have certain periods in life where they feel anxiety and depression, but this is linked to their lesson of transformation and forgiveness. Yeah, they are not that much into saying ‘I’m sorry’ or forgiving the ones who hurt them or lied to them.

In Greek mythology, you may find two opposite stories of Orion’s significance. The first version of this myth is the one in which Orion was described as the extremely high and beautiful mythical hunter, killed by a scorpion that was sent by goddess Artemis to prevent animal extinction. That was his punishment for wanting to kill all the animals on Earth. The second version of this story says that it was the Goddess of Earth who sent the Scorpio to kill him and prevent him from killing any more animals on the planet. Later on, these two were placed on the sky opposite each other, but the Orion won’t rise before the Scorpio goes down.

There is one more popular version of this myth – the story follows young Artemis, Goddess of the hunt who fell in love with Orion and wanted to marry him and serve him as her wife. Her brother didn’t approve of her wish and to prevent this from happening he planned a scheme for the lovers. The scheme was that he tricked Artemis to shoot at something, that happens to be Orion. She was devastated once she saw that her lover is now dead by her hands, and wanted to pay respect to him by placing him among the stars.

The constellation is visible to all observers at latitudes between +40° and -90°. Scorpius is bordered by Ara, Corona Australis, Lupus, Norma, Libra, Sagittarius and Ophiuchus.

Probably the most famous star in Scorpius constellation is a star called Antares. This is the brightest star in the constellation, and in astrology has certain connections to the success in travelling and living abroad. It brings money, fame and status in one of these careers: writing, travelling, tourism, education.