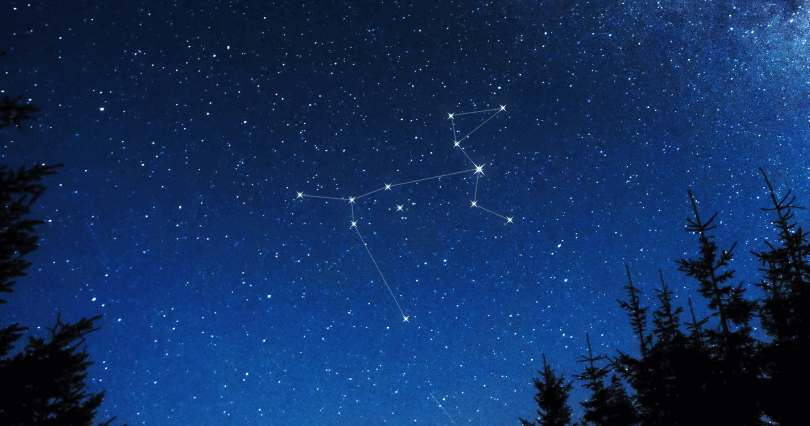 Canis Major or The Great Dog constellation is located in the southern hemisphere near the Orion. Although small it is very noticeable due to the bright stars he contains. Part of it is also one of the brightest fixed stars Sirius who is located on an animal’s chest.

In ancient Greek mythology, Canis Major is a tail of the fastest dog of its time Lailaps.
He was set on the island of Thebes, to chase the fox that has caused a lot of damage to its population. The Gods threw a curse and it was quite impossible to capture it, but the dog was sent to that mission.  The hunt was hopeless and Zeus finally ended it by placing both the fox and the dog in the sky to honor the dog for his devotion. Sirius star that is part of this constellation also has importance in Egyptian mythology. This star announced the Nile floods which were essential at that time.

Constellations were documented by Ptolemy in the 2nd century CE and part of his then-know 48 constellations in the sky. Canis Major was one of them and this is actually an asterism located in the southern celestial hemisphere. This is one of two constellations that represent the dog that is linked to Orion. This constellation is bordered by Lepus, Puppis, Columba, Monoceros constellations.

Alpha star of this constellation is Sirius which actually means ‘glowing’. It was believed that Sirius is one of the brightest objects in the sky and that the summer heat occurred just after its rising. These days were known as ‘dog days’ since only they were mad enough to go out in the heat. That is why Sirius is called a Dog Star. In Egypt, they used a term the Nile star or Star of Isis. Thanks to its brightness the people were able to found out when will Nile flood.

Canis Major contains several notable deep sky objects: the Canis Major Dwarf Galaxy, the open cluster Messier 41, the emission nebula NGC 2359 Thor’s helmet), and the colliding spiral galaxies NGC 2207 and IC 2163. This constellation contains one Messier object and has 4 stars with known planets. No meteor showers are connected to it.

How to spot Canis Major constellation?

Canis Major is the 43rd biggest constellation in the sky and it is located in the second quadrant of the southern hemisphere. If you want to see it set the latitudes between +60° and -90°.

If you want to find this constellation, search for Sirius. Once you find Orion’s belt, find the left edge of constellation a look for a few degrees’ south-west. You can’t miss the glory of the star Sirius. Canis Major belongs to the Orion family of constellations, along with Canis Minor, Lepus, Monoceros, and Orion.

Mythology of the Canis Major constellation

Canis Major is commonly taken to represent the “greater dog” following the hunter Orion in Greek myth. The constellation is depicted as a dog standing on its hind legs, pursuing a hare, represented by the constellation Lepus.

Canis Major is associated with Orion, the great hunter from Greek mythology. He is presented as the greater dog that is following Orion. Greeks called it Laelaps and he was one of the fastest dogs in the world. Zeus gave the Dog as a gift to Europa, but once she got murdered by her husband, he became the property of the Cephalus.

Cephalus took the dog to Thebes in Boeotia to hunt down a fox that was making the population miserable there. The island was cursed, and it was impossible to catch the fox. Like Laelaps, she was extremely fast and always on the run. This lasted for a few years, so Zeus finally wanted to end it and placed both of them among the stars to stop this race forever.