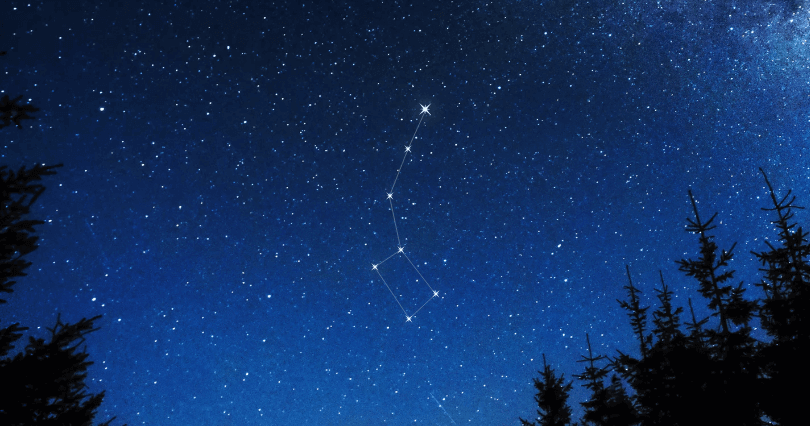 Ursa Minor constellation is called the Little Bear. It is also spotted in Ptolemy’s time and thought to be one of the oldest constellations known to the ancient Greeks. Ursa Minor is famous for containing the bright star Polaris that had major role in human history – it has been used for navigating the way across unknown seas. The constellation is easily spotted, because of the brightness of its containing star Polaris at the tip of the Bear’s tail. If you know how to look for Ursa Major, simply look upwards for the next big shiny star and you will find the Little Bear.

Little Bear constellation is visible throughout all year in the northern hemisphere, but the best time to look for it clearly is during long summer starry nights. Ursa Minor rotates around its star Polaris and therefore never dips below the Horizon. Little and Big bear is connected both in the sky and in Greek mythology. Both point to North Star and circle around it and are contained of asterisms forming two different shaped patterns. Polaris is the brightest stars of Ursa Minor constellation and is 433 light-years away from Earth.

The constellation is linked to the famous astronomer and philosopher Thales of Miletus who lived between 625 and 545 BC. He was one of the Seven Sages of Greece – a group of a philosopher known by his wisdom.

How to spot Ursa Minor constellation?

Ursa Minor is the 56th constellation in size and located in the third quadrant of the northern hemisphere. If you want to see it place latitudes between +90° and -10° during warm and clear summer nights. The constellation could be easily spotted, because of the brightness of its containing star Polaris at the tip of the Bear’s tail. If you know how to look for Ursa Major, simply look upwards for the next big shiny star and you will find the Little Bear.

The Little Dipper asterism is formed by Polaris, Yildun, Epsilon Ursae Minoris, Anwar al Farkadain, Akhfa al Farkadain, Pherked, and Kochab stars. Ursa Minor constellation contains only one star with known planets, and there aren’t any Messier objects that are associated with this constellation. There is one meteor shower however who has certain connections with Ursa Minor – The Ursids.

Mythology of the Ursa Minor constellation

The story of Ursa Minor is associated with the nymph Calisto and her son Arcas. Zeus was madly in love with Calisto, and once Hera heard that she became super jealous and turned Calisto into a bear. Later on, did Arcas by accident tried to kill the bear, and Zeus placed both son and mother among stars to avoid the family tragedy.

Another story is connected with nymph Ida, who took care of Zeus while he was a small boy on Crete island. The nymph is actually the Big Dipper. He was hidden on this island by his mother, so his father Cronus can’t find him and eat him. He swallowed all of his children because he was afraid one of them will overthrow him, and he was tricked in believing he already ate him. Zeus eventually fulfilled this prophecy and freed his brothers and sisters. He became the supreme God of the Olympians right after that.

The older myth says that the stars that form Little Dipper are a representation of the seven daughters of Atlas. They were tended to Hera’s orchard – golden apple garden that gave immortality.