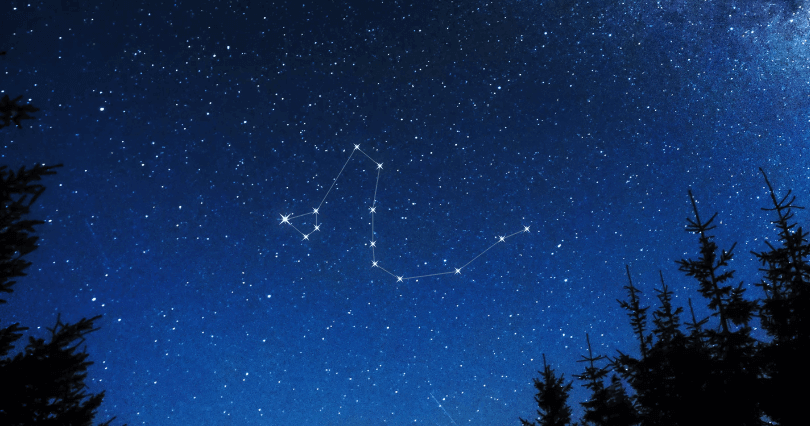 Draco constellation is one of the largest constellations and lies in the northern sky. Draco was first spotted by Ptolemy in the 2nd century CE and he described her as a circumpolar constellation due to fact it never sets below the horizon in the northern hemisphere.  Its name signifies ‘the dragon’ in Latin, and is associated with the Ladon dragon in Greek mythology. As the story goes, the Ladon was killed by Heracles, as part of his 12 labors, and the golden apples he guarded were taken away from him. This is why the constellation Heracles is nearby Draco one. There are also several more stories connected with the Draco constellation in both Greek and Roman mythology.

How to spot Draco Constellation

The easiest way to find this constellation is to search Ursa Major and Ursa Minor and see the gap between them. Another way to spot it is to locate Vega who is known to be one of the brightest stars in the sky and in Lyra constellation since nearby is Draco’s brightest star – Eltanin. Eltanin or Gamma Draconis forms the head of a dragon together with a few more bright stars: Nu Draconis, Beta Draconis, and Epsilon Draconis.

Draco is the 8th largest constellation in the night sky and it is placed in the third quadrant of the northern hemisphere. Constellations nearby are Boötes, Camelopardalis, Cepheus, Cygnus, Hercules, Lyra, Ursa Major, and Ursa Minor.

Notable objects that are part of Draco constellation are the Cat’s Eye Nebula (NGC 6543), the Spindle Galaxy (Messier 102, NGC 5866), and the Tadpole Galaxy.

Draco contains nine stars with known planets and has one Messier object, M102 (NGC 5866). The brightest star in it is Gamma Draconis. There is one meteor shower associated with the constellation; the Draconids, discovered in 2011, that is happening every February. Eltanin is an orange giant and the brightest Draco star located about 148 light-years away from Earth. Its traditional name is Arabic for “the dragon’s head” (or “the serpent’s head”).

Mythology of the Draco Constellation

In ancient Greek, Ladon was a dragon guardian of golden apples for the Goddess Hera. Apple tree was a wedding present from Zeus once they got married. She planted the tree in the garden on Mount Atlas and asked for both LAdon and Atlas daughters to guard it. Ladon’s role was to keep Hesperides from picking any apple from the tree. There are several stories of how did Ladon looked like – in one story he was described as a hundred-headed monster that was the child of a monster Typhon and Echidna who was half a woman and half serpent.

As part of his 12 labors, the Greek hero Heracles was asked to steal some golden apples from Hera’s garden. He used his poisoned arrows to kill the dragon and took the apples from him. Hera was very fond of the Ladon, and wanted to honor him for his service and she placed his image in the sky among the constellations. Draco is usually depicted around the North Pole and has one foot of Heracles who murdered him on its head.

Roman mythology tells that Draco was one of the Giant Titans who was in a war with the Gods of Olympus. He was murdered in the battle by the hand of Goddess Minerva, and she threw him into the sky where he froze somewhere around the North Pole.