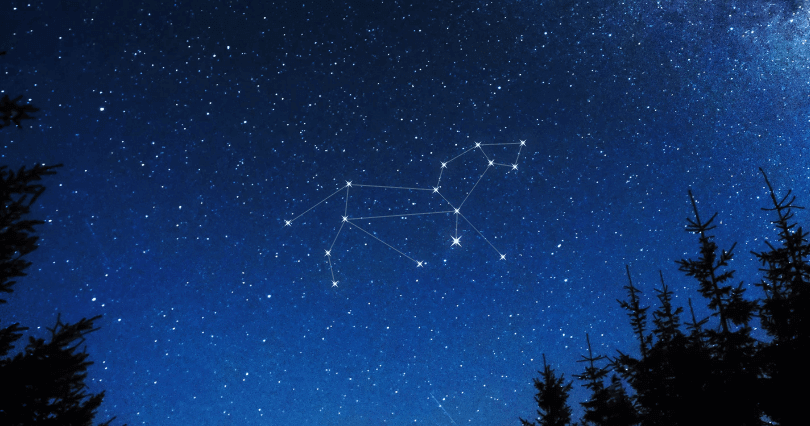 Leo constellation is a member of the Zodiac family of constellations and it lies in the northern sky. It is known as one of the largest constellations in the night sky. It was first introduced by famous Greek astronomer Ptolemy in 2nd century CE, along with other Zodiac constellations. Leo is now officially accepted and recognized by International Astronomical Union and listed as one of 88 modern constellations. Its symbol is ♌, and the story of this constellation is linked to the lion from Greek mythology, who was killed by Heracles in his 12 Labours.

The six bright stars on the night sky form a shape that represents the head of the Lion. The brightest star Regulus or Alpha Leonis is the heart of the lion. Denebola, the second brightest star of Leo constellation is the tail of a lion, and his forehead and rump are depicted by Zosma and Algieba stars – Gamma and Delta Leonis.

How to find Leo constellation in the night sky?

Leo constellation is the 12th largest constellation in size, and it is set in the second quadrant of the northern hemisphere. The constellation could be seen best at latitudes between +90° and -65°. The neighboring constellations are Virgo, Ursa Major, Lynx, Sextans, Leo Minor, Crater, Hydra, Coma Berenices, and Cancer.

The brightest star in Leo constellation is Regulus, which means prince or little king in Latin. In ancient times it was known as Basiliscos, and its Arabic name is Qalb al-Asad, which could be translated to “the heart of the lion.” This star is best seen during culmination in winter and spring months when the night sky is bright and clear. Regulus is the 22nd brightest star in the night sky with a magnitude of 1.35. It is only 77 light-years away from our Solar system.

Mythology of the Leo Constellation

In ancient Greece, Leo constellation was associated with the Nemean lion, a beast Heracles was sent to kill on his 12 Labours. The lion lived in a Nemea cave and was killing the local people. He had special skin, and could not be killed that easily. Heracles was sent to kill him, and he started with arrows first. He was not able to harm the lion, so he trapped the beast in the cave where he was living and chocked it. The lion’s claws he used to cut off his pelt, and the pelt with the head of the lion became his cloak. Zeus placed both Leo and Heracles in the night sky as constellations, to commemorate this event.