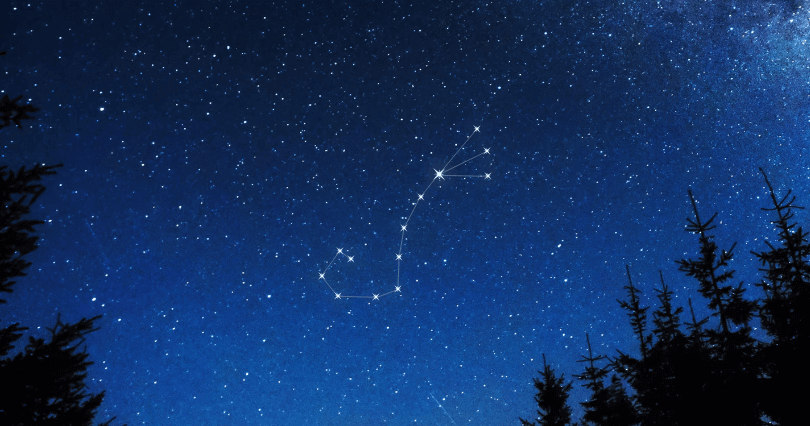 One of the oldest constellations known and spotted by famous Greek astronomer Ptolemy in the 2nd century, Scorpius constellation signifies the true scorpion animal energy and is associated with Orion story from Greek mythology. You can easily find it in the sky because it is located near the center of Milky Way. It contains several bright and known stars and the best time to spot them is definitely in the late Springtime when the sky is bright and starry.

Scorpius belongs to the Zodiac family of constellations.

How and where to spot Scorpius constellation in the night sky?

It is said that the best month to view this constellation in mid-July, around 9-10 pm.

In the Southern Hemisphere Scorpius lies near the center of the Milky Way, and in the Northern one lies close to the southern horizon. Near the horizon, you may also find the brightest of them all – the heart of Scorpio, a star named Antares. Down and to the left of it you will see a tail of a Scorpio with the stinger raised to strike.

Scorpius is the 33rd constellation in size and it is located in the third quadrant of the southern hemisphere. The constellation is visible to all observers at latitudes between +40° and -90°. Scorpius is bordered by Ara, Corona Australis, Lupus, Norma, Libra, Sagittarius, and Ophiuchus.

This constellation belongs to the Zodiac family of constellations along with Aries, Taurus, Gemini, Cancer, Leo, Virgo, Libra, Sagittarius, Capricornus, Aquarius, and Pisces.

This constellation has 13 stars with confirmed planets, and the brightest one is Antares or Alpha Scorpii with a magnitude of 0.96. This star is one of the brightest ones in the night sky. Scorpius contains many notable deep skies and Messier objects, and there are two meteor showers connected to it - the Alpha Scorpiids and the Omega Scorpiids. List of notable stars:

Mythology of the Scorpius constellation

In Greek mythology, you may find two opposite stories of Orion’s significance. The first version of this myth is the one in which Orion was described as the extremely high and beautiful mythical hunter, killed by a scorpion that was sent by goddess Artemis to prevent animal extinction. That was his punishment for wanting to kill all the animals on Earth. The second version of this story says that it was the Goddess of Earth who sent the Scorpio to kill him and prevent him from killing any more animals on the planet. Later on, these two were placed on the sky opposite each other, but the Orion won’t rise before the Scorpio goes down.

There is one more popular version of this myth – the story follows young Artemis, Goddess of the hunt who fell in love with Orion and wanted to marry him and serve him as her wife. Her brother didn’t approve of her wish and to prevent this from happening he planned a scheme for the lovers. The scheme was that he tricked Artemis to shoot at something, that happens to be Orion. She was devastated once she saw that her lover is now dead by her hands, and wanted to pay respect to him by placing him among the stars.