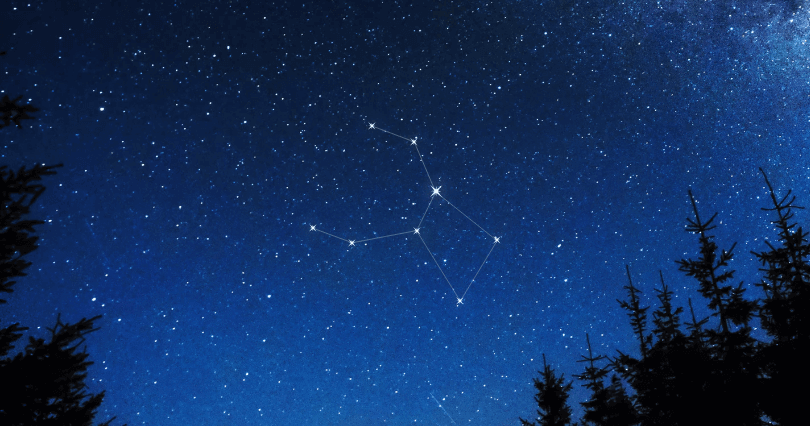 Crater constellation is one of the oldest constellations, first cataloged by Ptolemy. It is associated with the cup from Greek mythology and the God Apollo. This constellation has relatively fainted since it doesn’t contain any stars brighter than magnitude 4.

Crater constellation has a few notable deep-sky objects, and one of them is the Crater 2 dwarf galaxy, which is the 4th largest dwarf galaxy that is orbiting in Milky Way.

How to spot Crater constellation?

Crater is the 53rd constellation in size and it is located in the second quadrant of the southern hemisphere. If you want to observe just set the latitudes between +65° and -90°. Crater constellation is bordered by: Corvus, Hydra, Leo, Sextans, and Virgo constellations.

Crater constellation is a small constellation, an asterism that is located in the southern hemisphere – it lies south of the ecliptic plane. It was spotted by Ptolemy in the 2nd century CE but now got official recognized and is listed in 88 modern constellations by IAU.

Crater has only a few bright stars associated with it and no Messier Objects. Constellation is visible at latitudes between +65° and -90° and is best seen at culmination during the month of April. Crater contains 4 main stars and 12 stars with Bayer/Flamsteed designations. In order to spot these stars, you have to use binoculars and begin the search by looking for them. Alpha star. The brightest of Crater is Delta Crateris - an orange giant located 196 light-years away.

Crater constellation doesn’t know any Messier objects, but its brightest star is constellation Delta Crateris. Only one meteor shower is linked to the Crater and it is called the Eta Craterids.

Mythology of the Crater constellation

Although the constellation was linked to Ptolemy first, the Chinese astronomers were also familiar with Crater constellation. They believed their stars were part of the Vermillion Bird of the South. Along with the some that are now the stars from constellation Hydra, they depict the Red Bird’s wings.

In ancient Greek, the Crater was associated with Apollo’s cup – it is usually depicted as a chalice with two hands. Crater has a history with both Apollo and his trustful companion – raven, that is represented by constellation Corvus. As the story goes, Apollo was planning a ritual ceremony at the alter and he needed some water to complete this mission. The Gods have sent the raven to fetch some water in the cup, but due to its own laziness and other distractions that occurred along the way, he waited a few days for the bird to return. Raven finally brought the water-filled cup back, but he had also brought a water snake named Hydra as an excuse for being late. That made Apollo made and he cast a curse on all three – the cup, the snake and the raven and tossed them into the sky. After the curse has been cast, the raven’s feathers turned black and remained like that even nowadays.

A different story connects Crater with the cup from which King Demophon of Elaios drank the blood of his daughter. He had only one daughter and he sacrificed her every year so she can avoid being epidemics. His own descendants, however, were never among the raffle of victims. A nobleman Matusios asked the king to stop preventing her from being sick, and the king did not obey that. Nobleman killed the daughter and served her blood as wine in the cup. After the king found out the truth, he placed the cup among the stars to honor her and to inform the others about this tragic event.