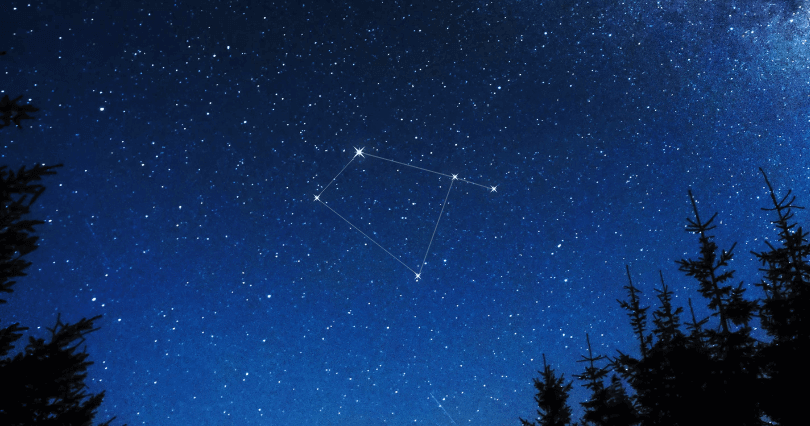 Corvus is a small fainted constellation located in the southern hemisphere. Its name means raven or crow in Latin. Constellation is associated with Apollo’s sacred bird in Greek mythology and was documented first by famous Greek astronomer Ptolemy in the 2nd century CE. Corvus is visible at latitudes between +60° and -90° and is best seen at culmination during the month of May. Today, it is one of the 88 modern constellations that was recognized by the International Astronomical Union (IAU).

This constellation contains no bright stars but is home to a few interesting galaxies, like the Antennae Galaxies. It is said that these two show a likely future of the Milky Way and Andromeda Galaxy when the two merge.

Corvus constellation is connected to Apollo’s bird (raven, crow) from Greek mythology. According to the story, the bird had white feathers and was sent to watch over Coronis, one of Apollo’s lovers who was pregnant. Coronis wasn’t that much interested in Apollo and fell in love with a mortal man named Itchy. When the raven reported back to Apollo, he became extremely raged for a bird not stopping this affair. He threw a curse on a bird scorching the raven’s feathers, and that is actually of the story on how did the ravens got its black feathers. Apollo sent Artemis to kill his lover, but right before she was declared dead, her unborn child was cut out of her womb and given to Chiron who raised him. The name of the child is Asclepius and he grew becoming a famous healer and serpent bearer. He is now represented by the constellation of Ophiuchus.

How to see Corvus constellation?

Corvus constellation is the 70th constellation in size and it lies in the third quadrant of the southern hemisphere. It is visible at latitudes between +60° and -90°. Nearby are other constellations like Crater, Hydra, and Virgo.

Corvus has only one star with its known planets and contains no Messier objects or notable deep sky objects. The brightest star in the constellation is Gamma Corvi. The only meteor shower connected to it is the Corvids.

Corvus contains 4 main stars and 10 with Bayer/Flamsteed designations. The Delta, Gamma, Epsilon and Beta star form an asterism that looks like a “sail”, and when merged together they look like they are pointed to the Spica star. The brightest star in this constellation is not an Alpha but is Gamma Corvi.

There are several myths that are connected with the story of Corvus. In Greek mythology, it signifies a Raven and is connected with Apollo and Crater.Crater constellation is the cup of the gods that belonged to Apollo. The cup was held by the Raven and this is a tail of a bird that was sent to fetch water to its owner. One time he came back to his master with the cup and the serpent Hydra in his claws and claimed that the snake prevented him from filling the cup. Apollo thought the raven is lying and tossed all of them into the sky and captured them as constellations. The cup was out of reach, for him to make sure the bird is always thirsty.

Corvus was known much before Ptolemy’s list of 48 constellations and has roots in Babylonian stories – Corvus was linked to a Raven who sat on the tail of the Serpent that was close with its Babylonian god. The constellation had significance to the Rain God.

In Indian astronomy, the first five stars in Corvus are associated with the lunar zodiacal constellation - the Hasta nakshatra.