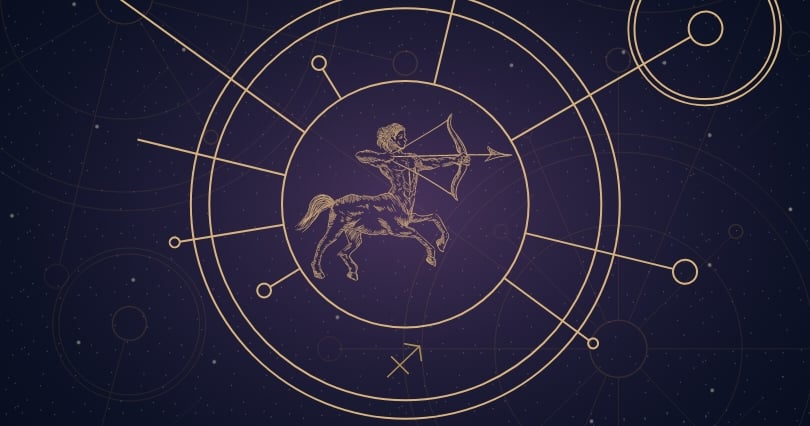 Sagittarius belongs to air signs in astrology and is ruled by the planet of luck Jupiter. These people are known as wise and optimistic ones, travel junkies and very spiritual and religious.  Sagittarius season is occurring from November 24th to December 22nd, and its symbol is ♐.

In astronomy, Sagittarius is a constellation and belongs to the Zodiac family of constellation along with 11 others. All of them are linked to astrology and known as 12 Zodiac signs.

True optimists, that always can see the best from all human-kind. They are animal lovers, travel junkies, explorers, and investigators. They seek greater knowledge and are drawn to everything alternative, spiritual, religious, new and trendy. They love going to school and learning, so you will notice most of them telling you how going to college was the best time of their lives.

They are creative, open-minded, and you may find many of them in design, marketing, architecture. Sagittarius is a natural-born educator, and they love both learning and teaching. They can never stop doing that, and you will notice that they always tend to go to new courses or learn new languages and skills. Travelling is in their blood, and to feel happy in their skin, they need to move more often. They are not into a typical lifestyle routine since they are motivated by their freedom the most. You will also find many freelancers among them.

The constellation was first introduced by Ptolemy in the 2nd century but was known long before that too many other cultures and civilizations like Roman, Egyptian and Babylonian.

In ancient Greece, Sagittarius is depicted as a centaur – half human half horse mythology creature who had four legs like a horse, and head and torso of a man. It is shown as archer holding a bow with an arrow, and is aiming toward the heart of constellation Scorpio and its brightest star Antares. In other variations, Sagittarius is wrongly interpreted as a centaur Chiron, who is placed in the night sky as constellation Centaurus.

Babylonians know a different story and they link this constellation with Nergal – the centaur god that had one panther and one human head. Since he was a hybrid, he had white wings and the stinger of a scorpion.

The constellation could be easily seen at latitudes between +55° and -90°, to all observers from both hemispheres. Nearby are these constellations: Scutum, Corona Australis, Indus, Microscopium, Aquila, Ophiuchus, Scorpius, Serpens and Telescopium.

There are no important fixed stars related to astrology from this constellation. However, there is a popular belief that the natal planet located in one of 1-4 degree of Sagittarius has certain heeling abilities. The people with this position have a mission to help others, healing them as doctors, or simply by talking with them.