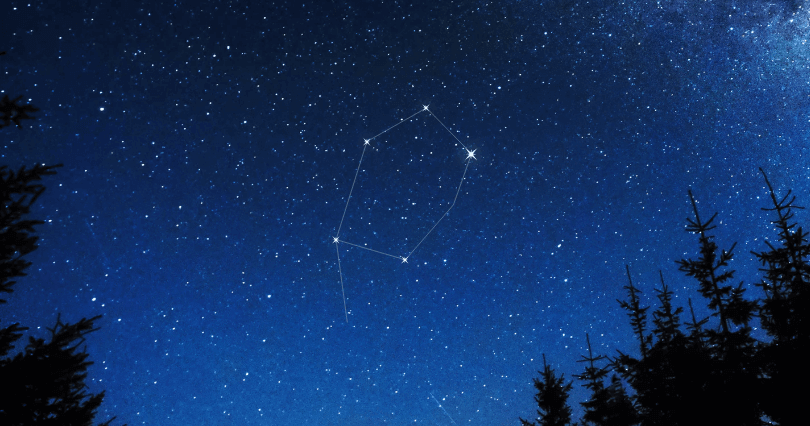 Auriga is Latin for charioteer of the antique racing car and is a beautiful collection of stars shaped in the pentagon and located north of the celestial equator. The main star of this constellation is named Capella and it is the third brightest star in the North. Auriga is associated with many Greek mythology characters like hero Erichthonius of Athens, who happens to be the son of Hephaestus (was known for being raised by the goddess Athena). Erichthonius invented the quadriga (the four-horse chariot) which he used in the battle that made him king of Athens.
Since Ptolemy’s time, Auriga constellation remained the one that is officially recognized by IAU today.

How to spot Auriga constellation?

Auriga is the 21st biggest constellation in the night sky. It is located in the first quadrant of the northern hemisphere and can be seen at latitudes between +90° and -40° - east of Taurus, and bordered by the Giraffe in the north, by Gemini in the south, and by the Lynx in the west. The best time to spot is during evenings winter time.

Auriga belongs to the Perseus family of constellations, together with Andromeda, Cassiopeia, Cepheus, Lacerta, Pegasus, Perseus and Triangulum.

Mythology of the Auriga Constellation

In Greek mythology, Auriga is identified with Erichthonius who was the king of Athens and the son of the fire god Hephaestus. Goddess Athena raised him and thought his many skills. He was the first man to tame and harness four horses to a chariot and was believed to be the inventor of quadriga – horse chariot. This helped him become king of Athens. Zeus raised him into the sky in his honor where he rode a chariot that resembles the chariot of the Sun.

Besides Greek mythology, there are several different stories about the man who represents Auriga constellation. In one of them, Auriga is Hephaestus, the lame god, who built the chariot so he could travel around the world, without any difficulties. Another myth says that the charioteer is Myrtilus, son of Hermes and that Auriga is a story of his battle against Pelops for the hand of Hippodamia, a beautiful king’s daughter. He didn’t want to obey her wish and let Pelops win the race, that the king invented to find the perfect husband for his lovely daughter. He raced him, and during the race, the wheels fell off and the King feel off the chariot and was dead. Pelops won the race and cast Myrtilus into the sea, and the Myrtilus cursed his house before he was drowned in the sea. Hermes placed his son among the stars to honor him and set Capella on Charioteer’s left shoulder – the goat that was foster-mother to Zeus to protect him.

Auriga is a part of the Perseus family of constellations, together with Andromeda, Cassiopeia, Cepheus, Cetus, Lacerta, Pegasus, Perseus, and Triangulum.

Auriga’s brightest star (Alpha Auriga) is Capella – a star which also happens to be 43 light-years away from Earth, and the sixth brightest star in the night sky. Capella means “a goat star”.

Other significant stars from this constellation: