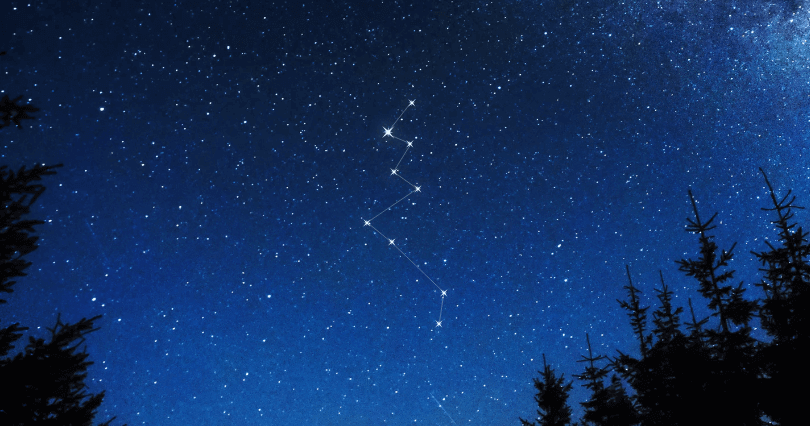 Lacerta, also called The Lizard constellation is a modern constellation found in 1987. It is described as a chain of inconspicuous stars in the northern hemisphere since it contains only one bright star.
Johannes Hevelius explained the positions of its stars and objects are shaped like the animal lizard, and he formed this thesis in the Sky Atlas "Firmamentum Sobiescianum sive Uranographia". Lacerta is positioned north of the ecliptic plane and contained 5 main stars in its asterism and 17 Flamsteed designated stars within its boundaries. Although he referred to this constellation as ‘lizard’ he came up with alternative name Stellio after a type of lizard that was known as a starred agama. The name was not used to much, and people referred to this constellation simply with the word lizard.

How to spot Lacerta Constellation?

The constellation looks like a lizard and winds in a zig-zag on a line which makes it particularly easy to spot during the autumn season. Nearby are constellations Cygnus, Cassiopeia, Cepheus, Pegasus, and Andromeda It is visible to all observers at latitudes between +90° and -40°. Best time to see it is in late autumn or in the month of December. Although Lacerta has no bright stars in the northern sky, you can spot it by navigating neighbor constellations like Cassiopeia and Cygnus, since Lacerta lies right between these two. You will easily spot Cassiopeia constellation due to the fact this one is shaped in the form of a letter W.

Mythology of the Lacerta constellation

Lacerta is considered to be a modern constellation, so there is no mythology story associated with this constellation. However, its stellar pattern was very visible to both Romans and Greeks in ancient times. When Hevelius discovered it, people believed this constellation had something to do with the Native American culture that was present at that time. They described the California region as the ‘lizard sky area’.

Lacerta is 68th constellation in size and it lies in the fourth quadrant of the northern hemisphere. It contains only one, not so bright star, with known planets and it contains no Messier objects. The brightest star is Alpha Lacertae, and there aren’t any meteor showers connected with this constellation.

Lacerta belongs to the Perseus family of constellations, along with Andromeda, Auriga, Cassiopeia, Cepheus, Cetus, Pegasus, Perseus, and Triangulum.