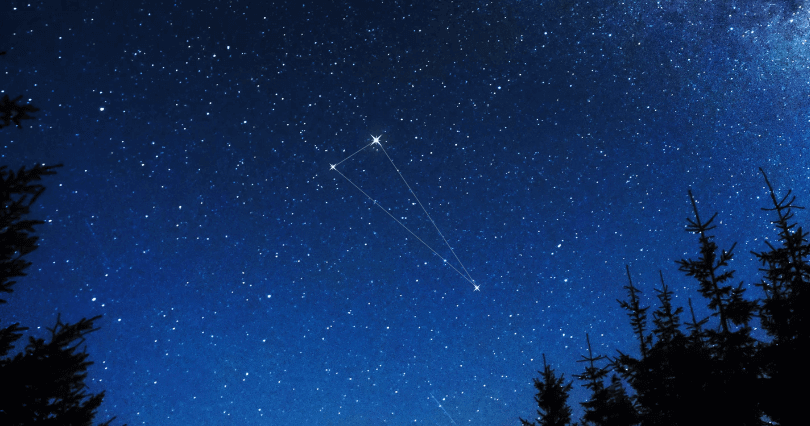 Triangulum is one of the few constellations that was actually named after an object instead of an ancient creature or modern animal. At first, it was named Sicilia by the island in Italy. She was named after it because there has been a popular saying that Ceres begged for Jupiter to immortalize her home in the starry night. For a short period of time, this region was known by the name Triangulum Minus, as it says in Hevelius’s records. After a while, it was quite normal for it to be referred to as Triangulum, because of the triangle that is formed by its 3 major stars.  The Greeks called it Delta when it was first discovered by Ptolemy.

How to spot Triangulum constellation?

Triangulum constellation is located in the northern sky. Its name means “the triangle” in Latin. You can easily spot it anywhere on Earth at longitudes between +90° and -60°. The best time to look for it is at culmination during the month of December.

Triangulum is the 78th constellation in size and it is located in the first quadrant of the northern hemisphere. You can check it out at latitudes between +90° and -60°. Nearby are Andromeda, Aries, Perseus, and Pisces, and you can use them as navigation if you have trouble finding it as first.

This constellation is quite small and consists of Alpha, Beta and Gamma Trianguli. Only two of the total three reached the 3rd magnitude.

Triangulum is one of the oldest known constellations, that consists of few not so bright stars, that are combined in the shape of a long narrow triangle. Triangulum constellation is home to one of the best-known galaxies in the night sky – Triangulum Galaxy, or Messier 33.

Triangulum belongs to the Perseus family of constellations, along with Andromeda, Auriga, Cassiopeia, Cepheus, Cetus, Lacerta, Pegasus, and Perseus.

The brightest star in the Triangulum is Beta Trianguli and there are no known meteor showers that are linked with the constellation.

Mythology of the Triangulum constellation

The Greeks referred to Triangulum as Deltoton because of its triangle shape that looked like the capital letter delta in Greece. It was believed at the time that delta is actually a delta of the Nile river. Another story says that it looked like the Italian island of Sicily.

The constellation was called Sicilia at first – Ceres who was the island’s ruler, begged Jupiter to place her home in the night sky.

Babylonians thought that the Triangulum and the star Gamma Andromedae, from Andromeda constellation, are actually one constellation called MUL Apin, or popular Plough. Hevelius, the famous astronomer, introduced the new name for it in 1687. The Triangulum Minus, formed by three stars located near Triangulum. His idea was soon rejected and just the name Triangulum remained is the correct one.