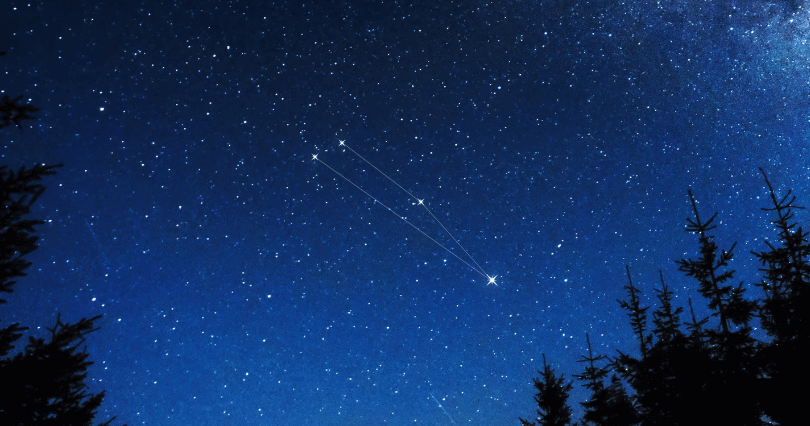 Circinus is the 4th smallest constellation in the night sky in the southern hemisphere. Its name means Compasses, and the constellation is faded since containing stars don’t reach the 3rd magnitude.
It lies in the southern Milky Way between these constellations: Apus, Musca, Lupus, Norma, Centaurus, and Triangulum Australe. The best time to look for it is in bright and clear summer nights.

After the telescope was invented, Laccaile astronomer named some constellations on the southern hemisphere that weren’t named before. They were not recognized as a separate constellation in Ptolemy’s time, but as undefined stars between known constellations. Circinus also has a name that is connected to technical novelty, and there aren’t any myths associated with it.

Circinus represented a drafting tool that was used in technical drawings, cartography, and navigation. Many people used it to draw circles and geometry.  Lacaille created its constellation to feel the gap between Triangulum Australe and the stars that are marking the forefeet of Centaurus.

The small constellation Circinus was invented by Nicholas de Lacaille during his stay at the Cape of Good Hope in 1763. He has published an updated sky map and gave new constellations its now known Latin names. IAU recognized it and listed it in 88 modern constellations list.

Three brightest stars from Circinus form a narrow triangle. Lacaille loved naming constellation after science tools, so he gave this constellation the name that means compass, because of its shape.

Circinus constellation consists of only 3 main stars and 9 Bayer/Flamsteed designated stars. The stars aren’t brighter than magnitude 3. There are several Deep Sky Objects associated with it, like the famous Circinus Galaxy, the X-ray source Circinus X-1, the pulsar PSR B1509-58, the open clusters NGC 5823 and NGC 5715, and the planetary nebula NGC 5315.

The brightest star in the constellation is Alpha Circini and is located 53.50 light-years from Earth.

Circinus has two stars with known exoplanets and does not contain any Messier objects. In 1977. was discovered its connection to one Meteor shower that peaks in every year in June - the Alpha Circinids (ACI).

The Circinus Galaxy was discovered in 1975. as an active galaxy with a black hole-powered core. This is a spiral galaxy that is 13 million light-years distant.

Major stars in Circinus are:

How to spot Circinus constellation?

Circinus is 85th constellation in size on the night sky and it lies in the third quadrant of the southern hemisphere. You can find it by setting latitudes between +30° and -90°.

This constellation is most visible at latitudes between +10° and -90° and you can see it best at culmination during the month of June.

Mythology of the Circinus Constellation

There are no mythology stories that are linked to Circinus. The constellation was named after the drafting tool that was used for drawing circles. The constellation Pyxis, on the other hand, is the one associated with the mariner’s compass which was used mostly for navigation and orientation. Circinus constellation is depicted as a pair of dividing compasses that were used to measure distances.