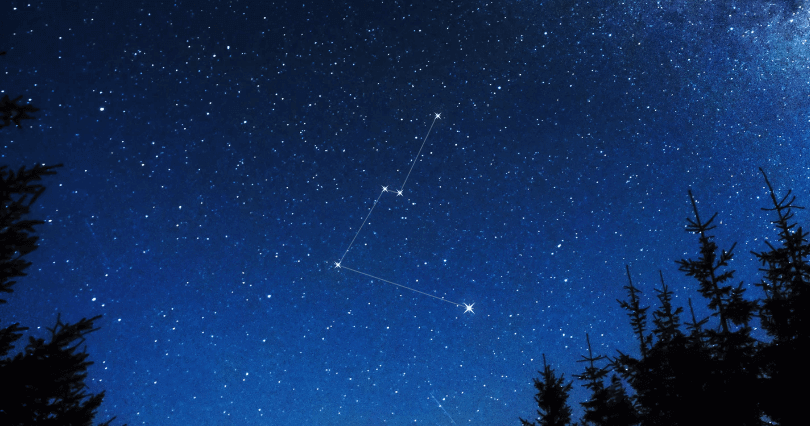 At the end of the 16th century, a Dutch fleet visited the Spice Islands in order to gain new trade relationships. Captain Keyser was in charge of this fleet, and during this journey, the 135 stars were measured and later on included in Plancius’ sky maps. Thanks to the captain and his fleet, Plancius managed to document 12 till then not known constellations including "De Waterslang". A few years later, the constellation was noted as "Hydrus". In Bayer’s ‘Uranometria’ from 1603. you can also find records of Hydrus constellation.

Hydrus constellation is known as the lesser water snake due its counterpart to much bigger Hydra constellation. The two are separated by Orion and Eridanus, and of course by the Milky Way.

How to see Hydrus constellation?

Hydrus is the 61st constellation in size and is positioned in the first quadrant of the southern hemisphere. The constellation could be seen best at latitudes +8° and -90°.
The bordered constellations are Dorado, Eridanus, Horologium, Mensa, Octans, Phoenix, Reticulum, and Tucana.

Hydrus is a home of four stars with known planets and the brightest one is Beta Hydri. The star is also known as the nearest since it is only 24.38 light-years distant from Earth. There are no Messier objects or meteor showers that are connected with this constellation.

Mythology of the Hydrus constellation

Since it was recently discovered, Hydrus constellation has no known connections with Greek-Roman mythology. This is a southern constellation and was not visible to Greeks and Romans. Hydrus was first documented by Dutch navigators in the 16th century, and the constellation is now connected with the big snake Hydra. At first, it represented sea snakes that were seen by the Dutch fleet on their journey to the legendary Spice Islands. Lacaile referred to it as ’Hydre Mâle so he can create a gender difference between Hydrus and Hydra constellations. Lacaille described that the Hydrus’ tail had extended to the star that used to be connected to Hydrus, and now is part of Octans constellation – Lambda Octantis star.